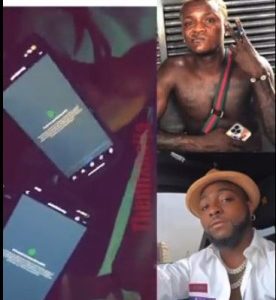 A video has captured the moment some men were reporting the Instagram of controversial singer, Portable.

While reporting his account, they accused him of being disrespectful.

This is coming amid reports of his disqualification from the Headies Awards which he was previously nominated in two categories.

The award organizers while frowning over the singer’s misconduct and unguarded utterances erased his name from the list.

Notwithstanding the big loss which has struck Portable, a group of men could be seen in a viral video massively reporting the Zazu star’s Instagram page with over 1 million followers.

While carrying out the act, they accused Portable of being disloyal and said he once talked down on the highly-rated crooner, Davido, and insulted show promoter, Sam Larry.