Messi In Talks With Xavi Over Shock Return To Barcelona 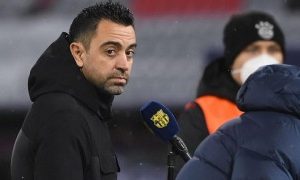 Paris Saint-Germain forward, Lionel Messi, has spoken to Barcelona coach Xavi Hernandez about a return to the Nou Camp this summer.

That is according to Okdiario’s chief pundit, Eduardo Inda, who made the claims while speaking on El Chiringuito.

Messi left Barca last summer for the Ligue 1 champions and Inda has said the 35-year-old has been talking to Xavi about a sensational return.

“Leo Messi made a call to Xavi and asked him about any possibility of returning.

“Xavi told him that he was delighted, but that he had to talk to Laporta and it would be Laporta who would call him.

“To date, that call from Laporta has not taken place. Now in Paris the leader is (Kylian) Mbappé,” Inda said.