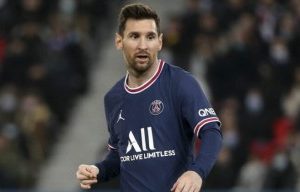 Paris Saint-Germain forward, Lionel Messi, has taken to his Instagram account to express his opinion on his team’s Ligue 1 win over Lyon on Sunday.

Messi at the weekend broke Manchester United star Cristiano Ronaldo’s record of non-penalty goals scored after he scored the only goal in PSG’s 1-0 win over Lyon.

The goal was Messi’s sixth goal in 11 appearances for PSG so far this season, and he is wowing fans with captivating performances.

The result against Lyon means PSG are on top of the table with 22 points from eight games.

Reacting after the game, Messi described the outcome of the match as an important win.

Messi wrote on Twitter: “Important win before the matches with @afaseleccion.”

The 35-year-old, who is in his second year at PSG, is set to lead the charge on both fronts this year – with PSG in the UEFA Champions League and with Argentina in the 2022 FIFA World Cup in Qatar.