Mikel Arteta Singles Out Arsenal Star For Praise Over His Versatility 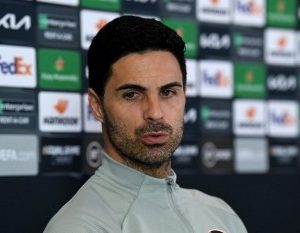 Arsenal boss, Mikel Arteta, has hailed Takehiro Tomiyasu for the versatility the player possesses ahead of his side’s Premier League tie with Brentford on Sunday.

Tomiyasu has been one of the most reliable players for Arsenal in recent times.

While the Japanese international usually operates in the right-back position, he has also played as a left-sided center-back for his national team and Arteta noted that it’s hard to figure out whether the 23-year-old is left-footed or right-footed due to his tremendous adaptability.

Arteta added that with the packed schedule to come in the coming weeks, Tomiyasu might get the opportunity to showcase his ability in different areas of defense.

“He can play central defender as well. Tomi has been playing left center back for his national team, Japan. When you look at the games, he can play as a left-back, because you cannot tell me if he’s a left or right-footed player.

“So we have the options there, and we have to utilize them in the best possible way. Especially with the number of minutes we are going to have in the next few weeks, it’s great that players are comfortable doing more than one position.”