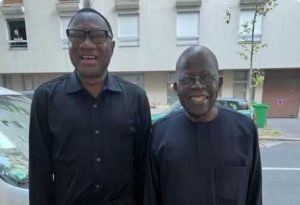 The businessman shared a picture of himself standing beside the former Governor of Lagos State via Twitter, and prayed that God granted Tinubu his desire to win the forthcoming 2023 presidential election.

Hours ago, the businessman expressed his support for the presidential candidate of the All Progressive Congress, Ahmed Bola Tinubu.

The businessman shared a picture of himself standing beside the former Governor of Lagos State via Twitter, and prayed that God granted Tinubu his desire to win the forthcoming 2023 presidential election.

“May God grant him his heart’s desire in becoming the President of this great Nation …F.Ote,”

This show of support drew mixed reactions, as many flooded his comment section with their varying opinions.

Social media influencer, @FS_Yusuf_ questioned the businessman if he would employ the presidential candidate for key positions in his enterprise.

“Influence aside, would you make him your General Manager, Operations in your company, with his current health situation?” he wrote.

Drawing a parallel between Otedola’s celebrity daughter schooling in the United Kingdom and Nigerian university students whose Academic year has been on hold due to the ongoing strike by lecturers, @Nattie_Best said, “DJ Cuppy is using school-equipped WiFi to type up her thesis in Oxford University. Yet here you are, supporting the APC to remain in power despite almost five months of ASUU strike. Nigerians, open your eyes and vote wisely o!”

Raymond Owonibi, @c019fba198ea4fb also tweeted, “With all due respect sir what is Asiwaju bringing to the table as most populous black nation President? Healthwise, in your opinion, is he fit? Sir, you guys should do the right thing even for once nah. We, the youths of Nigeria, reject another failure.”

“Why are you people angry? Man will protect his personal interests and business obviously. Na all of them dey cash out from Lagos. But what I know is that Otedola can’t employ someone like Tinubu to run his company because he knows he isn’t fit enough to do that,” @Irunnia_ wrote.

On the other hand, @seniormanOA stated that Otedola was only protecting his interests, “I don’t understand why you people are upset lol, you can’t be properly rich without the influence of politics. The elites will align with those who serve their best interest, you align with those that serve yours. Such is life.”

Defending the billionaire’s right to support his candidate, @AdamsAbdulrahman wrote, “Nigerians needs maturity, its a breach of fundamental human right if you think people don’t have their right to choose their candidates. If he says Tinubu, that’s his own choice. I am for Tinubu that’s my choice. And I am not preventing anyone from supporting his/her choice.”

“Why are some people crying and cursing here? He said Tinubu is his friend, and you expect him not to support him? Even Peter Obi regards Atiku as his boss na. I never see where people dey hate one man for nothing fa,” @igebina_A tweeted.