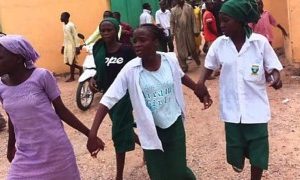 A mother of one of the abducted students of Federal Government College, Birnin Yauri, in Kebbi State, has passed away after she learnt that her daughter was impregnated by a terrorist in captivity, PRNigeria learnt from credible sources.

The sources, who pleaded for anonymity, said the mother died as a result of ‘grave emotional and psychological trauma’.

The pregnant young mother is among 11 remaining female students yet to be released after gunmen abducted over 100 students and eight teachers after killing a policeman in the mixed boarding school on June 17, 2021.

A few days after the abduction, security operatives succeeded in rescuing some of the students and teachers while others escaped from the gunmen in the process of taking them away. The bandits also released the teachers and 30 of the students after ransom payments.

On the tragic demise of one of the mothers of the kidnapped students, a close family relative of the deceased told PRNigeria that the mother collapsed when the news of her daughter’s pregnancy broke.

“Before she passed away, our sister was bitterly worried about the condition of her abducted daughter. She was hit by a stroke and became paralyzed after the sad news.

“She kept asking herself why would the terrorists have the guts to sleep with her 15-year-old daughter, and impregnate her, in the process. She maintained that she could not welcome her daughter with a bastard, meaning she will have hatred for the child her daughter will deliver for their abductors,” said the family relative.

In a related development, while some guardians are eagerly waiting for the release of their daughters, others are silently dying from the stigma of having grandchildren that would be called ‘bastards’.

“We are hearing that some parents of the FGC Yauri female are confused on how to handle their daughters returning home eventually with babies, fathered by criminals. It is something that gives them serious worry.

“As such, they might show empathy for their daughters’ plight, but not necessarily to the children their daughters delivered for the terrorists,” a source in Kebbi State, where FGC Birnin Yauri is located, told PRNigeria.

Early this month, PRNigeria reported that a 16-year-old girl, who was among the remaining 11 female students of FGC Yauri gave birth to a baby boy in abductors’ forest camp

In another report last Sunday, PRNigeria disclosed that armed bandits during the weekend organized a feast for the child of one of the female students in hostage.

A local source who had confirmed the news of the ‘naming ceremony’ of the child, disclosed that two other students in the terrorists’ den also gave birth to a baby girl and boy.

“There are about four other female students who are pregnant now. One of them is due to give birth any moment from now,” he had said.

The 11 schoolgirls remain in captivity despite payment of ransom and prisoner swaps, at different times.

Meanwhile, one of the parents of the abducted female students who spoke to PRNigeria on phone called on the National Security Adviser, Maj. Gen. Babagana Monguno (rtd)and Chief of Defence Staff, CDS, Gen. Leo Irabor and to intervene and ensure their children’s release.

“In the name of God Almighty, we call for that special committee constituted by the Chief of Defence Staff, Gen Lucky Irabor, to take charge and resolve it as quickly as possible as it did with Kaduna train passengers.

“We learn about how the remaining abducted passengers were released after six months in captivity through the efforts by the Irabor Committee and the endorsement of NSA Monguno.