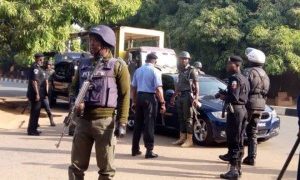 A suspected motorcycle snatcher, Isaac Dantala has been nabbed by Police Operatives attached to the Area Command, Asaba in Delta State.

He was arrested with a dagger along Asaba-Onitsha Expressway.

The Police also recovered a motorcycle with reg no UDD 332 DH from the suspect.

The Police arrested the suspect based on information that he allegedly snatched a motorcycle with a dagger along St. Desmond road in Okpanam.