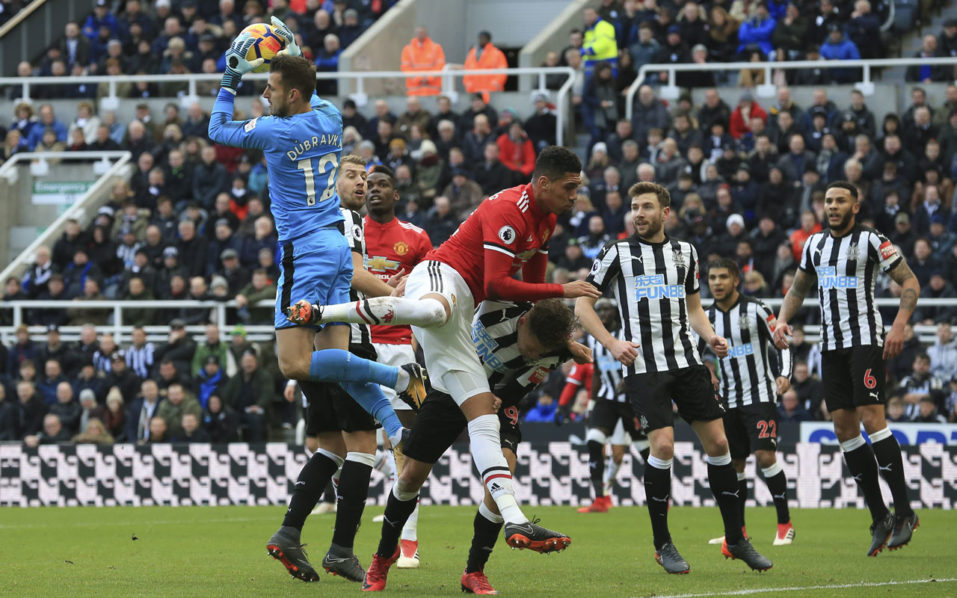 Jose Mourinho has refused to criticise Chris Smalling for a dive which led to the decisive goal in Manchester United’s shock 1-0 defeat at Newcastle.

Mourinho was scathing about United’s defending as Matt Ritchie scored from the 65th minute free-kick awarded after Smalling threw himself to the ground before he was tackled by Jonjo Shelvey.

The Manchester United defender’s yellow card was followed by further punishment as Shelvey’s free-kick was headed down by Florian Lejeune before Dwight Gayle touched it into the path of Ritchie.

But he didn’t turn his guns on England international Smalling.

“I’ve no complaints. I don’t like to complain about referees in this kind of situation, but I was disappointed with our defending,” Mourinho said.

“I don’t know if it was a free-kick, but I know we missed a challenge in the air.

“I remember a Newcastle player jumping while two of my men were looking at him and staying on the floor, then we missed the second ball.

“We try to work on organisation. They have their jobs and know their responsibility.”

It was the closest Mourinho came to criticising his players in a surprisingly composed assessment of one of their worst performances of the season.

His comments to his players in the privacy of the dressing room are likely to possess a far sharper edge after they fell 16 points behind leaders Manchester City.

Paul Pogba, in particular, can expect to be a target for harsh words from the manager.

The United midfielder drifted through the match and was substituted shortly after he failed to compete with Lejeune when the defender set up the decisive goal.

Asked about Pogba’s failure to influence the game, Mourinho said: “It’s very difficult to put me in a position where I have to criticise my players.”

However, Mourinho was far more eager to give his verdict on Newcastle’s players and left nobody in any doubt he was impressed by their response to dropping into the bottom three in the wake of good results for their relegation rivals.

“They came here to fight for a point, then found themselves in a position of being 1-0 up.

“In that moment, they went to the limits of their effort and sacrifice and everything a manager likes to see in their team.

“I saw it in my team after we went behind. I saw that desire to try to the last second.

“I imagine that Rafa Benitez is more than pleased with the efforts of his players.

“Were they lucky? Yes, they were, but sometimes you attract that luck with your state of mind.

“I think we did more than enough to leave without a defeat.”

“Every player gave everything, which was fantastic,” he said.

“We have been so close to winning so many games, but today we did it and it’s even better. It’s a boost for everyone.”

Newcastle were indebted to goalkeeper Martin Dubravka, who made two fine saves in an assured debut.

“He did well for his first game. A clean sheet against Manchester United is fantastic, but everybody was working hard to defend,” Benitez said.

“There was passion and commitment from everyone. These players don’t give up.

“We have some limitations and problems, but you could see they were giving everything.”