Former Big Brother Naija housemate, Tega Dominic, has revealed that her marriage ended two years ago, after she participated in the 6th edition of the reality show. 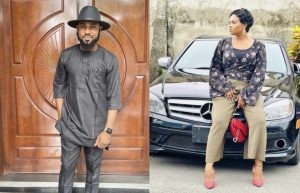 Being a married woman, Tega was heavily criticized for her alleged ‘romantic involvement’ with fellow housemate, Boma, during the reality show which aired in 2021.

Recall that after her eviction, Tega released a video where she apologized to her husband for having an affair with Boma while on the show.