Social media users are reacting after superstar singer, Rema stated that his female colleague, Tems is beautiful and would love to date her.

The songstress who bagged two awards at the BET 2022 caught the attention of Rema who began gushing over her lately.

Taking to his Twitter handle, Rema first took down his profile photo and replaced it with a picture of Tems.

He went on to admire Tems’ beauty while stating that he’s interested in dating her. 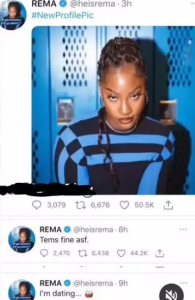 Reacting, netizens were of the view that Tems is way older than him.

One sophia wrote:
“Your teeth never strong to chew that kpomo..”

musaxv wrote:
“Na your Aunty be that bro.”