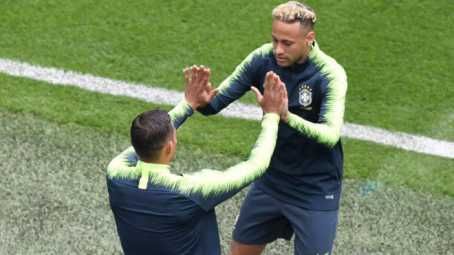 Neymar’s attitude during Brazil’s 2-0 win over Costa Rica has been critised by many, even defender Thiago Silva.

Brazil won thanks to two late goals from Phillippe Coutinho and Neymar in the 90th Minute.

Now, Defender Thiago Silva who wore the Brazil armband on Friday, has spoken on how Neymar Insulted him when he kicked a ball back to Costa Rica in an act of fair play.

“He is like a little brother to me and I try to look out for him, but today I feel sad because he insulted me when I returned a ball to Costa Rica,” Silva told the Brazilian press.

“He had a point as they had given him a lot, but this one ball wasn’t going to earn us the victory.

“I was saddened by his attitude and I told him that afterwards.”

Discussing the forward’s post-match tears,Silva said that he could understand the outpouring of emotion.

“It’s normal that Neymar needs to let off steam,” the defender said.

“He carried a heavy weight.

“He’ll now be a lot more relaxed for the third game.”