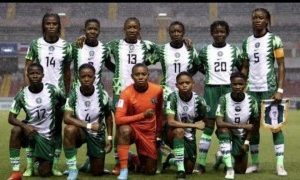 Nigeria’s Falconets will be back in action at the 2022 FIFA women’s World Cup in Costa Rica, when they will face Canada in their last Group C game.

The game is billed for the Estadio Alejandro Morera Soto, Alajuela, on Thursday, August 18 at 3am Nigerian time.

The Falconets will go into the tie on the back of two wins against France and South Korea which sealed qualification into the quarter-finals.

South Korea and France will also face each other the same time when the Falconets tackle Canada who have already been eliminated.

For Christopher Danjuma’s side, after securing passage into the knockout stage next up is a top spot finish.

For this to be achieved, the Falconets must beat Canada by any margin or at least secure a point.

This year’s tournament will be the fourth time both Nigeria and Canada will clash in the history of the U-20 women’s World Cup.

While Canada has emerged winners once, the Falconets have recorded two victories.

Their first meeting was at the inaugural edition in 2002 with hosts Canada beating the Falconets 2-0 in the group stage.

The two teams met again in the group phase in 2006 with the Falconets triumphing 3-2.

And their last encounter was in the group stage again and the Falconets won 3-1.

In the group’s other game between France and South Korea a draw should do for the Europeans by virtue of superior goals scored.

While the French beat Canada 3-1, South Korea recorded a 2-0 win.

The Falconets in six points top the group, France are second on three points, South Korea also on three points are third and Canada are bottom with no points.

And speaking ahead of the game against Canada, Falconets coach Danjuma explained the kind of approach his team will adopt against in their last group game.

“I believe the game against Canada is also one of those games that we want to improve on our lot, on every area that we’ve noticed that we need to work on.

“The more matches you win the more respect it earns you. So nobody wants to lose the position that has been attained so that’s the approach of the match.”