The German made gadgets are now obsolete – Dam authorities

Only private investors can rescue the Iseyin project – Expert 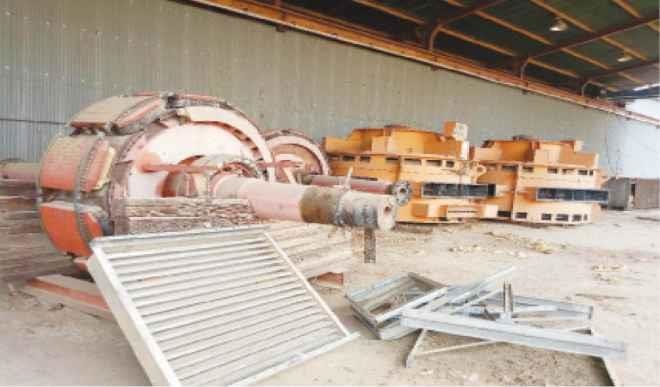 The multi-million naira electricity turbines bought by the Federal Government in 1982 for the hydro-power project at Ikere Gorge dam in Iseyin, Oyo State, have since become obsolete, Daily Trust can report.

Daily Trust learnt that the turbines were bought during the Shehu Shagari administration in 1982 from a German company and have been abandoned at the dam since then.

The turbines were expected to produce electricity that would benefit several host communities in Oke-Ogun area of the state. Some of these communities still battle with erratic power supply while some don’t even have access to power supply till date.

When this reporter went to the dam site last weekend, it was observed that the turbines now rot away in a shed erected over 36 years ago.

The dam’s Project Manager, Engineer Akingbade Sunday Isaac, told Daily Trust that the dam, presently being managed by the Ogun-Osun River Basin Development Authority, was built when Olusegun Obasanjo was military head of state to, among other functions, produce not less than six megawatts of electricity.

He, however, said the electricity components of the dam were only brought to the dam in 1982 during the Shehu Shagari era.

Our reporter observed that the turbines, said to have cost the then government millions of naira, as far back as over three decades ago, were still laying waste where they were kept since then.

Engineer Akingbade told Daily Trust that the turbines were now obsolete and could not be used for the purpose they were procured again.

One of the reasons he gave was that there are numerous new developments in hydro technology that have rendered the old turbines useless. He added that aside from that, the company that manufactured the turbines in Germany had since packed up so even if the equipment were installed, getting its parts would pose a serious problem.

The project manager insisted that the turbines are a waste at the moment, adding that for the project to become a reality, new sets of turbines have to be imported for the dam.

Residents of Iseyin, the town that hosts the dam in Iseyin LGA of Oyo State, decried successive government’s attitude to the optimal functioning of the dam, which experts said is one of the biggest in the country.

Malam Ganiyu Isah, a resident of one of the settlements near the dam, said the dam environment itself is in total darkness while the turbines that are meant to generate electricity for the host communities are rotting away where they were dumped over 30 years ago.

“I really don’t understand how we behave in this country. We bought equipment for a large amount of money but installing the equipment for the purpose they were meant for has been a problem for over three decades. It is unfortunate,’’ he said.

Malam Ganiyu said apart from the failed power aspect of the dam, there is no portable water from the dam to the host communities.

“Let me tell you, apart from the fishing aspect of the dam, the project is a total failure as far as we are concerned here,” he added.

The dam’s project manager, however, disagreed with that position, saying only the power aspect of the dam project could be said to be a failure so far.

He agreed, thought, that the host communities don’t have access to portable water but blamed the development on the Oyo State government, which he claimed failed to reticulate water from the dam to the various communities in the Oke-Ogun area of the state.

The Minister of Agriculture and Rural Development, Chief Audu Ogbeh, who reportedly visited the dam shortly after the turbines were shipped to the site in 1982, was said to have been moved to tear when he re-visited the dam late last year and saw the turbines still lying where they were kept 36 years ago.

Ogbeh recalled that as the then Minister of Communication, he was at the dam in 1982 when the Federal Government bought the equipment to complete the project but regretted that over three decades on, the turbines were yet to be installed.

“It is very sad that the dam has been idle since 1982. This is how we have been wasting our various resources that landed us in the present economic woos.’’

When Daily Trust inquired from the project manager why the turbines were not installed after over three decades, he attributed the ugly situation to the political instability in the country as well as paucity of funds.

But an expert in the hydro power sector, Engineer Ahmed Afolayan, disagreed with the project manager for blaming paucity of funds, wondering why government that spent such amount to procure the turbines from Germany would complain of funds for installing them.

He blamed the situation to frequent changes in government since then as well as government officials’ attitude towards completing projects not started by them.

On how the project can be brought back on track, the expert suggested that the Federal Government involves private investors and buys new turbines for the project since the old ones may no longer meet the present technological demands.

The project manager of the dam had also earlier identified private sector involvement as the only realistic way that the project can be fixed.

“Government cannot do everything alone. It must invite the private sector and non-governmental organisations to render a helping hand if the project is to be fixed any time soon,” he suggested.

On what the present government is doing to fix the project, the project manager said the Federal Government has identified the dam as among five in the country earmarked to generate hydro power.

He said a government delegation from Abuja recently visited the dam for a survey with a view to fixing the hydro project.

The Minister of Water Resources, Engineer Suleiman Adamu, had earlier lamented the proliferation of abandoned projects under the ministry by previous administrations including the bad state of the country’s dams.

He has vowed not to embark on new projects during his tenure until the abandoned projects, including the dams, are attended to.

Consequently, the minister had put in place a ministerial advisory committee with experts in the water sector to advise the Federal Government on how some of the abandoned projects can be fixed.