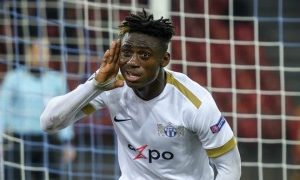 The Nigerian forward has been linked with a move to Scottish Premiership clubs, Rangers and Celtic.

The 24-year-old linked up with Randers on a permanent deal from KRC Genk last summer after scoring seven goals in 23 games during a previous loan spell.

Before then, the former MFM striker had a loan spell at French Ligue 2 side, Amiens.

“If the right club comes, Randers have no choice but to let me go,” Odey told Amtsavien.

“But I am happy to be in Randers, and that does not change the fact that there are some rumours about other clubs.

“For me, it’s about the preparations for the new season with the team I’m part of.”

Aside from Rangers and Celtic, a number of clubs in Europe are also interested in the striker.

Odey said he is not distracted by the persistent rumours.

“Rumors can spread quickly, but it’s not something I want to be distracted by,”he added.

“My agent takes care of everything that may be around the transfer market. I’m not trying to think about it. The important thing for me as a player is to focus on the preparations for the new season.”