A Nigerian man identified as Jude Akporu accused of dumping a woman after dating her for 18 years to marry someone else has finally broken his silence on the matter.   Jude alleged that he was being blackmailed.   Jude spoke up after the trending news was brought to his knowledge by a friend of his who has known him for quite a long time.   The friend took to social media to share Jude’s rebuttal. He started off by stating his relationship with Jude.

I read an allegation by a certain Facebook user name Shedrach Okpomeh, accusing my own friend and brother Jude of abandoning a girl that he has been dating for 18 years to marry another and made FP of Nairaland.   Very funny!   I have known Jude for years and I can confirm that he cannot do something of such. However, I confronted him on WhatsApp to get his reaction. He denied! Jude has released a statement and has informed his lawyer to take it up.   Here is his rebuttal and our conversation:

I’ve been trending on social media in the last 24hours.It’s only in Nigeria a guy will date a girl for 18years without knowing they’re dating.One Shadrach Okpomeh called me last night asking for 300k or else, he will post terrible thing about me. I swiftly declined as I don’t know how he got my phone number.I challenge him to put forward the name of the girl he claimed I dated for 18years.I am taking this matter up Immediately as I have informed my lawyer.After this, you will learn how not to blackmail people on social media.Jude 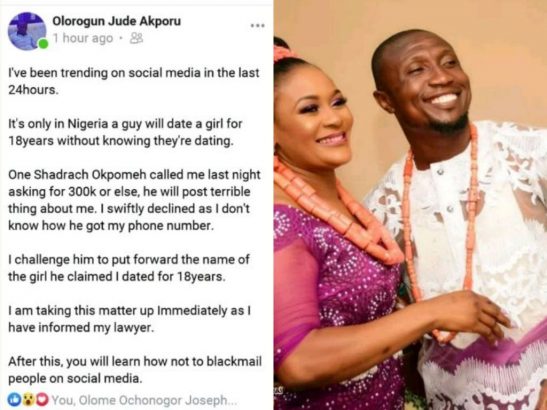