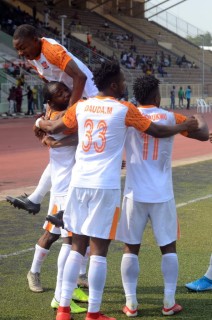 Enyimba were in imperious form as they thrashed Kano Pillars 4-0 in Aba on Thursday night, reports Completesports.

Victor Mbaoma scored a brace with Emeka Obioma and Godwin Emmanuel netting the other goals for Enyimba in the encounter.

The Peoples Elephant won an NPFL match by four + goal margin for the first time since August 2017.

It was Kano Pillars’ worst defeat in the NPFL since a 4-0 loss to Shooting Stars in August 2016.

Rivers United maintained their four points lead at the top of the log despite the defeat.

Abubakar Aliyu and Salomon Chigoziem were on target for Wikki Tourists in the game.