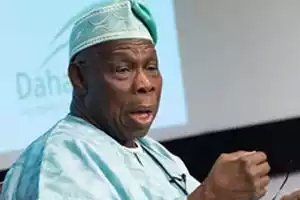 Former president, Chief Olusegun Obasanjo is now a PhD holder. According to reports, Obasanjo has defended his doctoral thesis at the National Open University of Nigeria, (NOUN) where he sat attentively with a laptop last week.

The research topic of the former head of state is speculated to centre around Christian Theology.

Recall that in 2014, Obasanjo enrolled at NOUN as a graduate student having obtained a post-graduate Diploma in 2009.

When asked why he needed further education he said he wanted to achieve success in every aspect of life.

“I always aspire to something new in my farm. I do that in my international activities. I do it in my writing. I do it in the improvement of my academic work which helps to sharpen my brain and strengthen my faith.”

The National Open University of Nigeria is an open and distance learning institution first established in 1983 by Alhaji Shehu Shagari and later rejuvenated in 2002 by the Obasanjo-led administration.