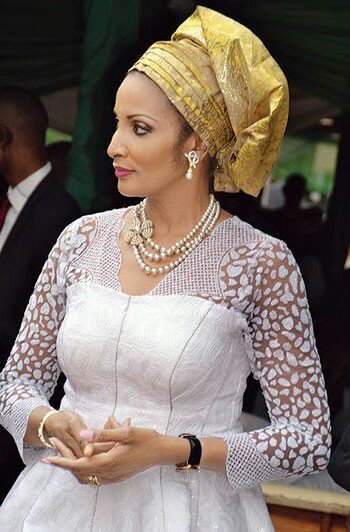 The senatorial ambition of the widow of Dim Chukwuemeka Odumegwu Ojukwu, Bianca, has put a spanner in the family of the ex-Biafran leader, Daily Sun reports.

It was gathered that the attack by some of the Ikemba Nnewi’s children did not go down well with greater number of family members as an elder in the larger Ojukwu family, yesterday, distanced himself from their action.

He described it as ignoble.

Pa Anthony Nnadozie Ojukwu, who said he is number three in the larger Ojukwu family, blamed Emeka Ojukwu Jnr. for the friction, even as he said the issue was hyped by the media.

Pa Ojukwu, who said he would soon clock 80, explained that the late Odumegwu Ojukwu’s father, Sir Louis Ojukwu, was his uncle and that what is happening in Ojukwu’s family is a matter of personal interest which, he noted, could not be termed as disunity.

According to him, if Ojukwu’s family was not in peace, that would be confirmed by the elders in the family, including himself.

He, however, explained that the difficulty elders in the family had encountered while intervening in the seeming misunderstanding between Bianca and Ojukwu’s son was that the latter had relocated to Abuja, which he said made it difficult for any discussion to take place, as not all discussions could be done over the telephone.

The octogenarian said the family welcomed Bianca’s political ambition wholeheartedly, and emphasised that they recognised Bianca as an achiever who has been the pride of the family.

“He said nobody should stop her in her quest to go to the National Assembly.

“No one is against it, except Emeka junior. Emeka made the greatest mistake joining the All Progressives Congress (APC) instead of finding a way to realign with Governor Willie Obiano to keep pace in the family.

“Without consulting anybody, he jumped to the APC. We don’t like the action. At least, we elders in the family should have been consulted.

“Of course, in politics there is no permanent enemy, but permanent interest.

“He was pursuing his interest. But, when he saw that Bianca was gaining bigger recognition by the governor, he, then, decided to join the APC.

“And when he did, Bianca got closer to Obiano and she is now in the forefront much more than Emeka.

Asked whether any attempt had been made to settle the feud between Emeka junior and Ojukwu’s widow, Pa Ojukwu retorted: “Which one? Is it domestic, economic or political feud?

“As far as I’m concerned, there is no political feud.

“He has a domestic friction with his father’s wife, Bianca. And the friction is chequered. That is why intervention is difficult.”

Another member of the family, an Anambra-based medical doctor, who declined to be named, also distanced himself from the attack. He insisted Emeka is on his own.

Meanwhile, a group, Oke Ndigbo, has flayed Ikemba’s children for denigrating their late father’s name by harassing his widow, Bianca, over the legality of their marriage.