Okoye Makes Eredivisie Team Of The Month For March 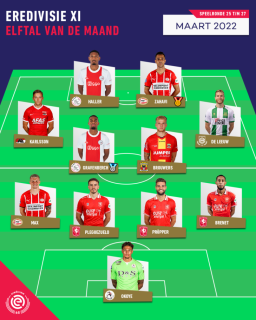 Super Eagles goalkeeper Maduka Okoye has been named in the Eredivisie Team of the Month for March after impressing in the colours of relegation threatened Sparta Rotterdam.

The Team of the Month was published on the Eredivisie’s verified Twitter handle.

Okoye was in superb form last month as he helped Sparta Rotterdam avoid defeat in the two games played.

Aside helping his club avoid defeat, he also did not concede any goal as they sealed a 1-0 win against Go Ahead Eagles and held NEC to a goalless draw away.

Prior to the two games, he also kept a clean in the fixture at Vitesse in early March, which was abandoned in stoppage time due to fans troubles where he had to confront a pitch invader.

It would be recalled he also saved a penalty against Vitesse to keep his team in the game.

Okoye missed the Super Eagles 2022 World Cup qualifying playoffs against Ghana due to illness and was replaced by Francis Uzoho.