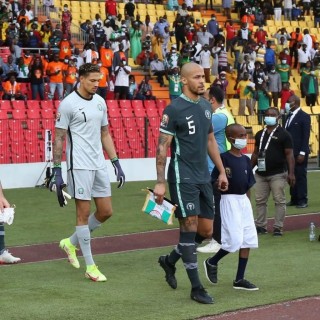 The Super Eagles opened their campaign at the 2021 Africa Cup of Nations with a win against the Pharaohs of Egypt on Tuesday.

The West Africans dominated the game with Kelechi Iheanacho firing home the winner on the half hour mark.

The three-time African champions will look to consolidate on the win when they take on the Falcons of Jediane in their second game in the competition.

Okoye insisted that the Super Eagles will go all out for a win against the Sudanese.

“It’s good to start the competition with a win. It’s always good when you come to a big tournament like this and start on a positive,”Okoye said after the team’s training session on Wednesday.

“What is important now is for us to approach the game like we did against Egypt. We must remain humble and not take them for granted.

“Our focus is now on Saturday’s game.The game against Egypt is behind us now and we want three points in the one.”

Sudan forced Guinea-Bissau to a 0-0 draw in their first game.

By Adeboye Amosu in Garoua