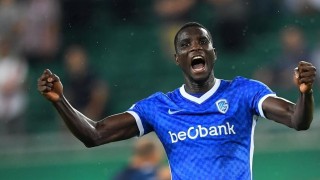 The game ended Genk’s run of three consecutive games without a win (two defeats and one draw).

Onuachu opened scoring from the penalty spot in the 11th minute before making it 2-0 also from the spot in the third minute of first half added time.

And in the 79th minute he completed his hat-trick to make it 5-0 to Genk.

Onuachu now has 19 goals in 28 league games for the Belgian outfit this season.

He currently sits in third place in the top scorers chart and six goals behind first.