Kenneth Okonkwo, popularly known as Andy, is a man loved by all in the south east and among the Igbos.

I for one prefer watching any film that featured Andy because of his true to life acting as well as the story line of most of his films.

All these popularity and love are gradually coming to an end owing to the support Andy has for President Buhari and his unguarded utterances against his people.

Mr Andy has shown by his words that he is far from his people.

Whoever adviced him to drop Buhari’s name in his infamous speech made a very big mistake. It has done an irreparable damage to whatever ambition he has.

Mr Andy seen not to know that the Igbos have suffered greatly under Buhari’s government.

Mr Andy insulted the sensibilities of the Igbos when he stated that the Igbos will wander in the wilderness for 8 years if they fail to vote Buhari.

Noting can be more insulting than this. This has led the youths of Enugu state declaring that Andy will never be governor in Enugu state.

Mr Andy failed to learn from the predicament of former governor of Anambra state Mr Ngige.

Mr Andy failed to understand that Buhari hates the Igbos both in words and actions and has chosen to parlay with a known enemy. Thus, the igbos in Enugu state have chosen to kill his political ambition. 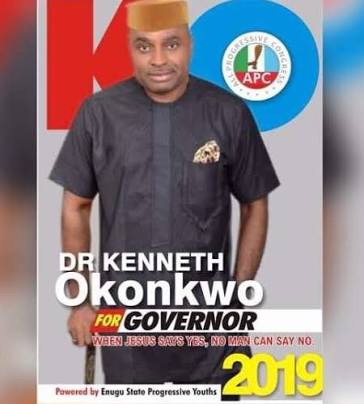