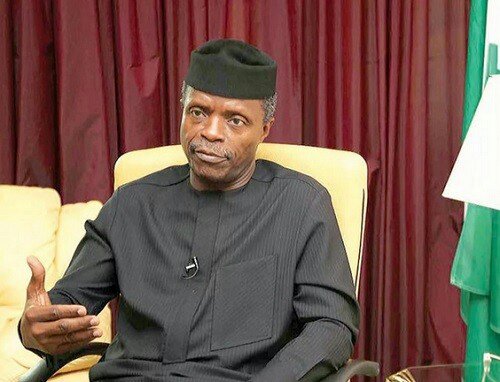 Osinbajo had earlier on Thursday, September 20, arrived at the Asaba International Airport, Asaba, to inspect some of the flood impacted areas in Delta and Anambra states.

The vice president who had landed at about 1.00 pm is on a one-day working official visit to two states that is being ravaged by flood, was welcomed by Governor Ifeanyi Okowa.

“VP Osinbajo, with Gov Obiano, gets on the boat to reach out to people and see the situation close-up in Otuocha, Anambra State after flying over vast areas submerged by the floods.

“VP Osinbajo now in Anambra State to see the situation after the floods. He flew, in a chopper, over vast areas including farmlands affected.“It’s one of the worst we have seen in recent times,” the VP laments.

“VP Osinbajo now in Asaba having flown over the areas affected by the flood in Delta State. He is visiting with the victims of the flood who have now been temporarily relocated to the State capital.

“He assures the people affected that Buhari administration will do everything possible to bring relief and restoration to all who have suffered on account of this flood disaster.”