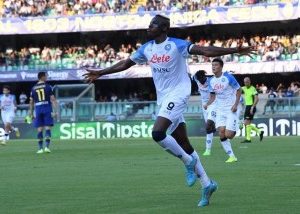 Victor Osimhen has celebrated Napoli’s win in their opening game of the new season against Hellas Verona, reports Completesports.

The Partenopei defeated their hosts 5-2 at the Stadio Marc’ Antonio Bentegodi.

Osimhen netted Luciano Spalletti’s side second goal of the game late in the first half.

“Perfect Start Into A Long Journey,We Keep Going.Thanks To The Traveling Fans For Their Support,GOD Is The Greatest

The Nigeria international scored 14 goals in 27 league appearances for the Blues last season.