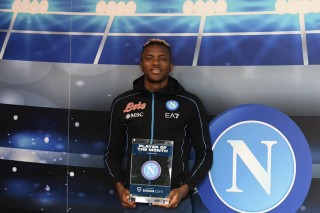 The 23-year-old was in good form for Napoli, who collected two wins and a loss in the three games they were engaged in the month.

The Naples side started the month with a 1-0 loss to leaders AC Milan, but they bounced back with a 2-1 win over Lazio when the Super Eagles attacker claimed a brace.

Another brace for Osimhen came in a 2-1 victory over Udinese.

“The March Player of the Month as voted for by fans on @SociosItalia is Victor Osimhen!

Osimhen has scored 12 goals in 22 league appearances for Napoli this season.

The striker is expected to be in action when Napoli take on Empoli at the Stadio Carlo Castellani on Sunday.