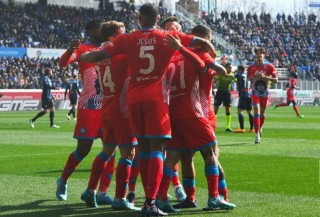 ﻿Napoli gave their title hopes a big boost after they defeated Atalanta 3-1 away in Sunday’s Serie A.

Osimhen was not in Napoli’s matchday squad for the game after featuring in the 2022 World Cup qualifier between Nigeria and Ghana.

The win saw Napoli, now on 66 points, go level on points with AC Milan in the league table.

It is Napoli’s third straight win and their fourth in their last five games.

Lorenzo Insigne opened the scoring on 14 minutes from the penalty spot before Matteo Politano made it 2-0 on 37 minutes.

Atalanta pulled a goal back on 58 minutes through Marten de Roon before Eljif Elmas netted Napoli’s third in the 81st minute.

Milan will go three points clear if they beat Bologna at the San Siro on Monday.