The region’s head, Dmytro Zhyvytskyy, posted photographs on Telegram of the charred shell of a four-storey building and rescuers searching rubble following Monday’s strike on Okhtyrka. 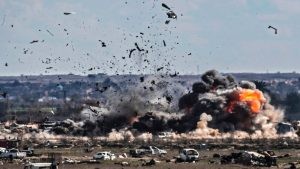 “The UK Guardian reports that more than 70 Ukrainian soldiers have been killed in the eastern city of Okhtyrka after a Russian missile strike on a military base, in what is thought to be the biggest loss of life in a single incident in Moscow’s invasion.

The death toll – reported by Ukrainian officials in the city – follows a sharp intensification of the Russian bombardment of Ukrainian cities, including the use of multiple-launch rocket systems against civilian areas, which has led to increasing casualties.

The region’s head, Dmytro Zhyvytskyy, posted photographs on Telegram of the charred shell of a four-storey building and rescuers searching rubble following Monday’s strike on Okhtyrka.

There were contradictory initial reports of what had caused the casualties. According to some reports, the building was largely destroyed by a single strike from an Iskander ballistic missile or three reported strikes with smaller munitions, reportedly including fuel air explosives.

Video from the aftermath of the attack showed civil defence workers scrambling over piles of concrete rubble and a crane, attempting to lift debris to reach those underneath with a large water-filled crater nearby.

In a Facebook post, Zhyvytskyy said many Russian soldiers and some local residents also died in the bombardment.

The Okhtyrka mayor, Pavlo Kuzmenko, posted on Facebook, saying: “Again, the enemy is waging a vile war. A fuel-air bomb was dropped on an oil depot, oil tanks were blown up.”

The escalation in shelling and missile strikes in Ukraine’s urban areas came as a Russian military column gathering to the north of Kyiv was estimated to be 40 miles long, more than doubling in size in since the weekend amid warnings US intelligence warnings that Russia was attempting to complete its encirclement of Kyiv.

The Russian armoured convoy was 17 miles (25km) from the centre of the Ukrainian capital, a city normally home to three million, according to the US satellite company Maxar. Its photos also showed deployments of ground forces and ground attack helicopter units in southern Belarus, amid concerns its president, Alexander Lukashenko, could send troops to help Vladimir Putin’s Russian forces in the next 24 hours.

Lukashenko said on Tuesday his country had no plans to join the invasion, according to the state news agency.

The deaths in Okhtyrka came as the UK’s Ministry of Defence warned that the “use of heavy artillery in densely populated urban areas greatly increase the risk of civilian casualties”, and reports on Tuesday morning that Russian soldiers had entered the southern city of Kherson.