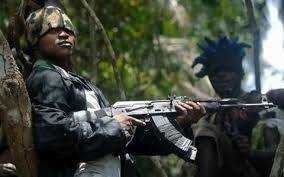 One other police operative reportedly injured in the attack is said to be receiving medical attention at an undisclosed location.

Some gunmen, who are yet to be identified, have caused serious tension in a Kwara State community.

The unknown gunmen struck on Thursday at a quarry site in the Shao area of Moro Local Government of Kwara State, killing one mobile police officer and abducting a Chinese citizen.

Reports indicate that the gunmen burnt the car allegedly used in the operation and disappeared into thin air.

One other police operative reportedly injured in the attack is said to be receiving medical attention at an undisclosed location.

When contacted, the spokesman of the Kwara State Police Command, SP Okasanmi Ajayi, said ”the command is working round the clock to get the victim rescued and perpetrators apprehended.”

“Meanwhile, the command is in a mourning mood over the killing of one of our operatives,” he added.

According to the spokesman, the Commissioner of Police, Tuesday Assayomo, has set up a special investigation team to investigate the matter.

He said, “the people of Kwara State would be briefed accordingly of our progress please.”