Parents attack Igbinedion’s daughter, Omosede, for coming to pick her son from school with a Rolls Royce 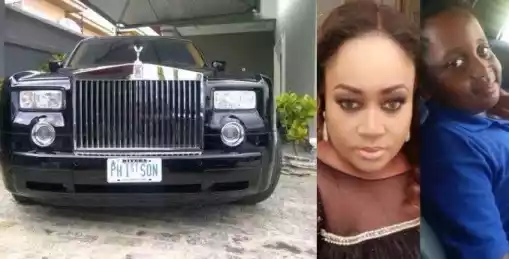 ​Omosede Igbinedion is a member of the House of Representatives and one of the daughters of billionaire businessman, Gabriel Igbinedion.  She went to pick her son from school with a Rolls Royce yesterday and according to her, other mothers who came to pick their children, caused a scene. Read what she wrote on her IG page below…
‘Yesterday, I saw a woman run frantic, all because I brought a Rolls Royce to school to pick up Alex. She was so mad! Then she further attracted some other shallow people. One of the ladies said she would bring 4 Rolls Royce’s tomorrow. Another one said she would park in the same spot I did, as the car took up the space of 2 cars. It just made me laugh. You need to see the scene the woman caused. I really thought it was sad. Is anyone stopping them ? I just don’t get it. I taught my son yesterday that hard work is key and I have always taught him never to compare himself with others, set his targets and aim for them.

What would such parents teach their children ? I used to be dropped off and picked from school with a Rolls when I was his age at school in London. Its obvious some people may be materially rich but mentally poor. Its such a shame. ?????? I bet you if I parked a keke right in front of the school gate they would not mind that ???? Maybe na this Government !

Worst of it all is the school asking a teacher to take Alex out of class earlier, as they were causing such a scene. May be these low thinking individuals did not want their kids to see the car and ask them questions. What a shame ! Tomorrow when their kids start stealing or having a complex life you wonder why ?’