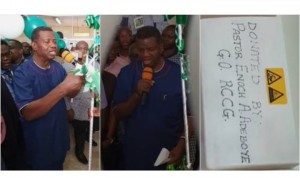 It was gathered that the N10 million was used to purchase one hemodialysis machine for the hospital. The machine is said to be used to filter a patient’s blood to remove excess water and waste products in the blood.

The pastor shared a post on his Instagram page, explaining that God had charged him to donate the hemodialysis machine to the school hospital. He said he left his home after his morning devotion to commission the machine.

In his post, Adeboye revealed that he realised that the hospital needed more help. He said he was led by the Holy Spirit and made a decision to donate two more.

Adeboye’s son, Leke, also shared the post on his Instagram page, adding that his father has promised to donate two more machines at the sum of N20m.