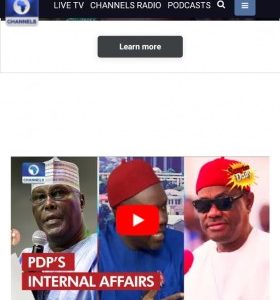 Governor Wike and his allies better known as the G5 are at loggerheads with the leadership of the main opposition party since the presidential primary. The former minister lost to Atiku Abubakar in the exercise but claims the election was not fair and is insisting on the resignation of the PDP national chairman Iyorchia Ayu. The group has also pulled out of the party’s presidential campaign, maintaining that Atiku and the PDP chief are from the same region of the country.

But Bwala has downplayed the move, saying the party is poised to win next year’s presidential election.

“Our party is poised to win the election. Wike’s non-participation would affect a little bit of the margin. So, if we are supposed to win with nine million votes or eight million votes, that may reduce to six million votes or something like that,” he said on Channels Television’s Sunrise Daily on Wednesday.

“But this victory is destined by God and I can tell you that there can be conspiracy and collaboration or anything. We know the Electoral Amendment Act and what it brings. We saw it in Osun where some members of our party even worked against the party in that state.

“But what happened? The ‘Dancing Senator’ (Ademola Adeleke) danced his way to victory because the people spoke and their voices were held. This is how we are going to be looking at this election because the bigger picture is what we are looking at. Have you not seen the multi-dimensional poverty index?”

Bwala also claimed that the Rivers State Governor “chased” the Labour Party (LP) presidential candidate Peter Obi, Governor Dave Umahi, and others out of the PDP. He, however, maintained that the Atiku is committed to uniting Nigeria despite the crisis in the party.