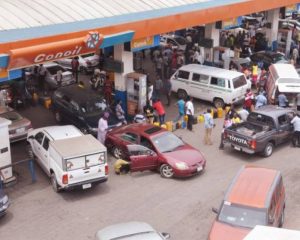 As petrol scarcity bites harder in Dutse, residents have urged the Federal Government to take decisive measures to restore normalcy in the supply of the product to the Jigawa capital.

A News Agency of Nigeria (NAN) correspondent who visited all the filling stations in Jigawa state capital, reported that only the NNPC Mega Station was dispensing petroleum products to long queues of vehicles.

A cross section of the motorists on Friday noted that the scarcity was artificial, pointing accusing fingers at activities of economic saboteurs.

A resident, Malam Abubakar Umar, said: “People, especially the poor, are exposed to difficulties in sourcing for the product due to its acute scarcity.

“The Federal Government must adopt practical measures to check petrol scarcity; such measures are imperative to address this lingering problem once and for all.”

Another resident, Malam Sani Muhammad, said that the exorbitant prices of petrol had exposed many people to unnecessary hardships and forced some to park their vehicles and alternated with commercial ones.

Muhammad, who attributed the problem to diversion of the product and hike in its prices by some petroleum marketers, added “even the price of ordinary kola-nuts has now increased”.

A civil servant, Malam Ahmad Balarabe, bemoaned the devastating effect of the scarcity on many residents in the state capital.

“Look at the situation most of us find ourselves now; to fuel vehicles, to travel, to buy food stuff, in fact, to do everything now has become a problem.

“Almost everything is affected by the present fuel scarcity across the country.

“So the Federal government and other parties concerned should do everything possible within their powers to bring an end to this unnecessary hardship we are experiencing.

“However, we know that the Federal Government is doing its best for Nigerians,” Balarabe said.

NAN reports that as at Jan. 4, only the Dutse NNPC Mega Station was selling the commodity to consumers at the official pump price of N145 per litre.

However, the product is sold for between N250 and N300 per litre at the black market