Photos of the 12 inmates Gov. Ambode freed at Kirikiri after 20-34 years in Prison 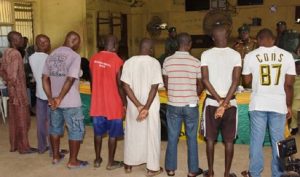 Lagos State Governor, Akinwunmi Ambode on Tuesday released 12 prisoners in the state in furtherance of the law establishing the State Advisory Council on Prerogative of Mercy.

The prisoners who have spent between 20 and 34-years at the Kirikiri Maximum Security Prison, Apapa were released based on the advice of the State Advisory Council on Prerogative of Mercy.

The inmates were said to have satisfied basic conditions such as remorse, good behaviour and readiness to contribute meaningfully to the society.

While handing over the release order from the Governor to the Lagos Prisons Command, Chairman of the State Advisory Council on Prerogative of Mercy, Professor Oyelowo Oyewo, who represented Governor Ambode at the event told newsmen that the release of the inmates was in line with the commitment of the present administration to the ideals of the justice sector reforms through prison decongestion. 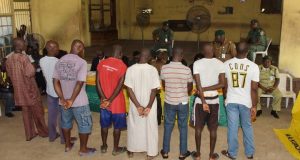 According to him, the exercise was in pursuant to the provisions of the 1999 Constitution (as amended) which empowered the Governor to exercise prerogative of mercy, and also to offer hope to such inmates who had demonstrated capacity to be re-absorbed into the society.

“Basically, in exercising this there are guidelines that are set and some of these include looking at the period that has been served by the inmates and for hard capital offences, such inmates must have served for a sufficient period of time and the reason is that the Council in the guidelines try to balance various interests such as that of the community, the family of the victims and also the interest of the administration of criminal justice and justice reform to ensure that prisoners are reformed and rehabilitated.

He also added that “It also includes transformation in the life of the prisoner because there must be remorse and acknowledgment of the fact that something wrong had been done and then the prisoner must also have acquired some skills to show that he is ready to be rehabilitated into the society.