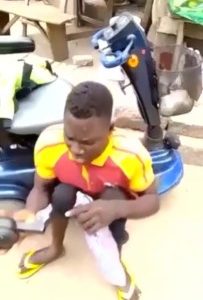 A physically challenged man from Adamawa has cried out for help.

The man identified as John Solam said he was attacked by thugs in Lagos for campaigning for Peter Obi with his automatic wheelchair.

The man who showed the damage done to his wheelchair and the injury he sustained from the alleged assault, stated that he shouldn’t be attacked for his choice.