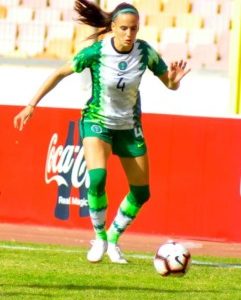 Leicester City defender Ashleigh Plumptre is delighted with her achievement with Nigeria since making her debut for the West Africans.

Formerly an England youth international, Plumptre made her senior Nigeria debut in February 2022.

The 24-year-old helped the Super Falcons qualify for the 2022 Africa Women’s Cup of Nations in Morocco.

The defender also played a key role as the nine-time African champions qualify for the 2023 FIFA Women’s World Cup.

“It still hasn’t really sunk in about the World Cup,” she told BBC Sport Africa.

“I remember watching the England Under-20s at the World Cup when I was about that age. I wasn’t thinking that would be me one day, and here we are. Crazy!”

“I always have to do something for a purpose,” the 24-year-old said.

“I’m somebody who is a bit different in football because I don’t just play to play it. I have to do it for a reason.

“When we won the league with Leicester I sat down with my dad and said ‘This is something I want to do’. It was actually my dad, who is my agent, who got in contact with Randy (Waldrum, head coach of the Super Falcons).”