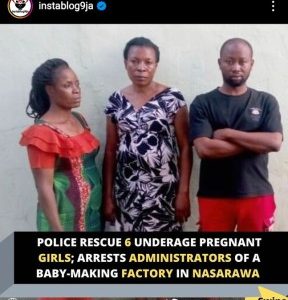 Police operatives in Nasarawa acting on a tip-off, on November 17, bursted a suspected Baby factory located at Ado Kasa and rescued six young girls and a baby of about six months at St. Bridget Orphanage Home.

According to a press release by the spokesperson of the command, DSP Ramhan Nansel, administrator of the orphanage home, Eze Ezeogu Norbert, and her colleagues, Nnaemeka Eze, Okechukwu Ogechi, and Obiagheli Chidi, were arrested during the operation.

He revealed that Norbert abducted under aged pregnant girls, held them hostage till they gave birth and sold their children to the highest bidder. He added that investigation also revealed that the Orphanage home was not registered.

It is reported that the suspects and victims have been handed over to National Agency for the Prosecution of Trafficking in Persons (NAPTIP) for further investigation and prosecution.