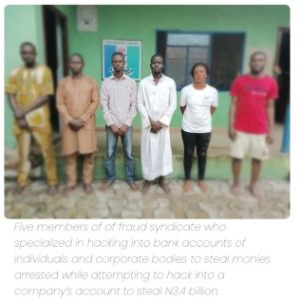 The Inspector-General of Police, Usman Baba has restated that his administration will not relent in fighting crimes and criminality in Nigeria.

In a statement by Force spokesman, Muyiwa Adejobi, the IGP hailed the Oyo Command, and the Force Intelligence Bureau Intelligence Response Squad (FIB-IRT) for recent successes.

The IGP acknowledged the achievements recorded via identification, trailing and arrest of criminal suspects through technical and human intelligence.

The Suspects were nabbed after concluding plans to attack a new generation bank within the Ibadan metropolis in Oyo.

The FIB-IRT also arrested five members of a fraud syndicate specialized in breaching bank accounts of individuals and corporate bodies.

The Police caught them as they attempted to hack into a company’s account and steal N3.4billion.

Adejobi added that the suspects would be charged to court upon conclusion of investigations.

Baba assured of commitment to maximize operational capacity and charged officers to continue to go after those engaging in nefarious activities.