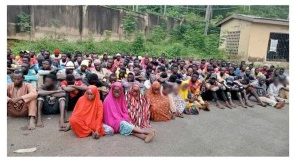 A truck from Kaura Namuda, Zamfara State, carrying 147 persons was stopped by the police in Oyo State.

Adewale Osifeso, the state’s police public relations officer, revealed this in a statement on Tuesday, stating that the truck was stopped along Iyana Bodija-Iso Pako, in Ibadan.

According to him, there are three female children, four adult women, and 140 males between the ages of 12 and 30 among the passengers.

Following an inquiry, a police spokesman stated that the truck, operated by Abdulahi Aliu, had the license plate BWR 143XD and was traveling in the direction of Ogere, Ogun State.

According to the statement, “In furtherance to the above, today Tuesday, 02/08/2022 at about 1500hrs, members of the public intercepted a Blue Iveco Truck with Reg No. BWR 143XD, driven by one Abdulahi Aliu’m’ age 30yrs and conveying about One Hundred and 147 passengers comprising; 140 male passengers between 12-30 years, four adult female passengers, and three female Children.”

According to preliminary investigations, the truck and its occupants, who are mostly farmers and traders, were traveling from Kaura Namuda, Zamfara State, to Ogere, Ogun State.

According to the police PRO, a team of police, Department of State Services (DSS), and Amotekun corps members meticulously investigated the vehicle and profiled its passengers to rule out any possibility that it was transporting escapees from any known jailbreaks in the nation.

According to him, the truck was carrying eight motorcycles, bags of beans, and bags of onions, all of which were being delivered to the owners at Bodija Market.

The truck and its passengers were subsequently led out of Oyo State and handed over to security personnel in Ogun State, where they are currently being held.

The police spokesman praised Oyo people for their constant assistance in delivering accurate and timely information while issuing a warning against disseminating rumors and unreliable information that could cause unwarranted alarm among locals.

The NPF Rescue Me app is hence free to download for iPhone and Android users, respectively, on both platforms.