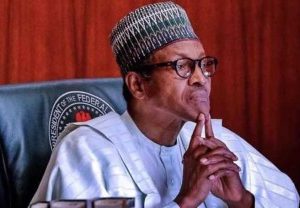 The President, Major General Muhammadu Buhari (retd.), has ordered the Nigeria National Petroleum Corporation and its subsidiaries to ensure that section 4 of the East-West road, spanning from Eleme Roundabout to Onne junction, is fixed without delay through the Tax Credit Scheme.

He said that the East-West road project currently handled by the Federal Ministry of Works and Housing is the largest infrastructure in Nigeria,and very dear to his administration.

Buhari stated this on Thursday in Uyo, Akwa Ibom State while delivering a keynote address at the opening ceremony of the meeting of the fifth National Council on Niger Delta held at Ibom Icon Hotel and Suites.

The event was with the theme, ‘Harnessing 21st century Development Initiatives and Strategies for Greater Development in the Niger Delta’.

The President who was represented by the Minister of Environment, Alhaji Mohammed Abdullahi, said the completion of the project is a ” top priority for this administration”

The East-West road project which is now being handled by the federal Ministry of Works and Housing is the largest infrastructure project in Nigeria, as it’s very strategic road, connectors the country’s busiest and foremost commercial cities in the region.

“Considering the priority this administration places on the completion of this project, the Ministry of Petroleum has directed NNPC and it’s subsidiaries to step in and fix section 4 of the East-West road (Eleme Roundabout to Onne Junction), through the Tax Credit Scheme.”

He stated further that his administration had undertaken critical reforms in the Niger Delta Development Commission, adding that the implementation of the recommendations of the Forensic Audit Report which is being implemented in phases would bring about the constitution of the new board, which according to him is the desire of the most stakeholders in the region

One of the cardinal mandates of my admissions is to tackle corruption. To this end and in response to the call of the Governors of the South- South geopolitical zone for a Forensic Audit of NDDC from 2000- 2019, the Report of Audit had been submitted and the implementation of it recommendations has commenced in phases

“I hereby assure you that this process will eventually bring about the Constitution of the a new board for the commission which is the desire of most stakeholders in the region.”

In his remarks, chairman of the council and Minister of the Niger Delta Affairs, Umana Okon Umana, explained that the meeting which is held annually, is a platform for bringing all Development Partners to the same table to ” proffer solutions to developmental and Socioeconomic issues in the region”, adding however that the council could not gold for the year 2021, for some cogent reasons.

He disclosed that his administration would publish a compendium of all completed projects undertaken the NDDC in all the states in the Niger region.

Umana, said the need for the publication of the compendium became necessary as some states are of the opinion that NDDC has not done enough.

We intend to publish a compendium of all completed projects of NDDC in all the states in the Niger Delta region, because some states are saying that NDDC has not done enough.. The perception of people about what is not reported is that nothing has been done, so let people challenge us. when we publish the compendium” he said.