Putin: Russia Will Respond if NATO Deploys Weapons In Finland And Sweden 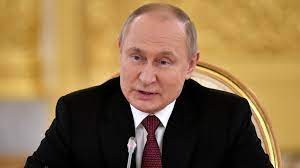 Russian President Vladimir Putin, after the Caspian summit, spoke about the situation in Ukraine and NATO expansion

Putin said that Russia does not have such problems with Sweden and Finland, “as it has with Ukraine.”

At the same time, he stressed that Moscow would be forced to respond in the mirror if NATO military infrastructure is deployed in these countries.

About the Russian special operation in Ukraine

When asked if the goals of the special operation had changed, the president replied that nothing had changed.
“I said in the early morning of the 24th [February — Approx. ed.] directly publicly to the whole country, to the whole world. I have nothing to add to this. Nothing has changed,” Putin said.

At the same time, the Russian leader added that tactics could be different.

“The tactics proposed by the Ministry of Defense: where to move the troops, what objects to hit,” he specified.

According to him, Western calls to continue hostilities confirm the assumption that “the good of Ukraine is not an end, but a means of protecting their interests.