Racism In Sports: Premier League Clubs To Stop Taking Knee With Gesture Only For Certain Fixtures 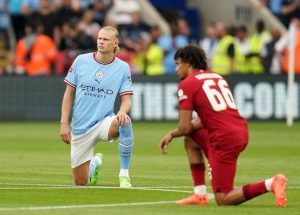 Premier League clubs will stop taking the knee before the majority of games next season after discussions between the league and captains of all 20 premier clubs.

The gesture was first introduced following the murder of George Floyd in the United States in May 2020. According to the captains, there is a belief that the gesture’s impact has been weakened following two seasons of constant use on the pitch.

The players believe that by reserving the gesture’s use for big matches they hope that it will carry greater effect in the fight for equality. Players will take the knee before this weekend’s opening round of fixtures; the No Room for Racism matches in October and March; the Boxing Day fixtures; the final league matches of the season and the FA Cup and EFL Cup finals.

In a statement the captains said: “We have decided to select significant moments to take the knee during the season to highlight our unity against all forms of racism and in so doing we continue to show solidarity for a common cause. We remain resolutely committed to eradicate racial prejudice, and to bring about an inclusive society with respect and equal opportunities for all.”

A small number of players, including Brentford striker Ivan Toney and Crystal Palace star Wilfried Zaha, had already stopped last season because they felt it had lost meaning. The entire Brentford squad then joined their team-mate Toney in remaining upright.

Liverpool captain Jordan Henderson last season said that there was still a feeling at Anfield of the knee getting a strong message across.

“Everybody’s entitled to do what they will feel comfortable doing,’ the midfielder told GQ magazine after Chelsea left back Marcos Alonso had decided to stand. “I know Marcos is against any form of racism, so we’re all fighting for the same thing here and we all have the same message. But, for myself and the players at Liverpool, I think we are still in favour of it and that it is still having an impact.”