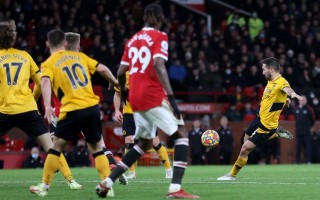 Welcome to the madhouse of Manchester United; a club that has spent hundreds of millions of pounds and yet looks short in every area of the pitch; an expensively-assembled team that rarely appears to be the sum of its part and is struggling in seventh place in the Premier League and flattered by that position.

This was Ralf Rangnick’s sixth game in charge and his first defeat. If ever he was in any doubt as to the scale of the task then here it was laid bare as Wolverhampton Wanderers arrived at Old Trafford and dominated and thoroughly deserved this victory. They were rarely in trouble. Captain Conor Coady has never had it so easy at the heart of their defence. 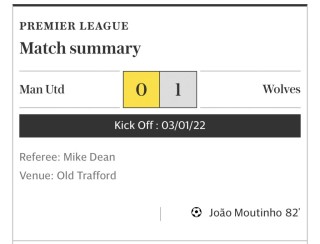 It condemned United to their sixth defeat in 14 league games. Phil Jones made his first appearance for almost two years, and performed reasonably well, but his team-mates acted like they, too, had not kicked a ball competitively for that length of time. They were a bunch of frustrated strangers.

With Harry Maguire injured, Cristiano Ronaldo was captain, for the first time since Match 2008 – presumably in the hope that it would improve his body language, but that did not happen.

A day after Chelsea and Liverpool had played out a thrilling draw, this stultifying showing from United was poor in comparison. United started the season with pretensions of finally mounting their own title challenge. How deluded that now seems.

It was ragged and rudderless from United as Wolves outplayed them. Ruben Neves ran the midfield; Daniel Podence was too sharp and after 20 minutes their fans were ‘ole-ing’ as they hogged possession. On the touchline head coach Bruno Lage hopped up and down in frustration wondering how none of the 15 shots Wolves had in the first-half – the most for a side visiting this stadium since 2004 – had gone in.

United were abject. Wolves turned over possession with Podence running at Jones and forcing David De Gea to beat his shot away for a corner. From it the ball was cleared to Neves 25 yards out and De Gea saved more spectacularly from his dipping volley. The goalkeeper was involved again as he repelled a drive from Nelson Semedo. 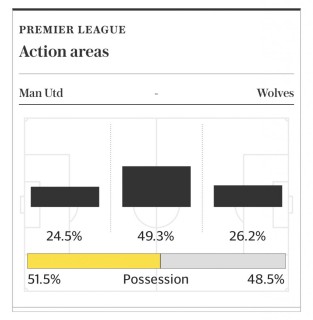 And so it continued. There was a horrendous header from Ronaldo straight to Jimenez inside the United area who guided the ball to Marcal whose cross was met by Jimenez – only for him to head it past the post when he should have scored. Lage leapt in the air again.

For United? There were a couple of glimpses. Jadon Sancho shot when he should have picked out Ronaldo; Edinson Cavani shot when he should have found Greenwood but that was it. They lined up in a 4-4-2 that funnelled into 4-5-1 when they did not have the ball and with Ronaldo expected to press. He did not do that. In midfield, with Nemanja Matic and Scott McTominay lumbering, they were pedestrian while their full-backs were pinned back.

Wolves, playing their first game since December 19, would have been furious with themselves that they were not in front by half-time. United could have had no complaint. Rangnick demands control but this was the antithesis of that.

They were sent out early for the second-half. No surprise in that. And there was an improvement as they pushed up higher but it was not enough with Rangnick calling on Fernandes, who had been dropped to the bench. He replaced Greenwood, who had been United’s most lively player, and it was predictably met with a chorus of boos. Unless injured it was a curious decision. 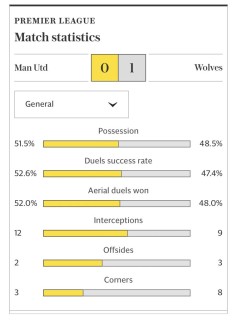 But it was Fernandes who went close as he connected with Matic’s cut-back, after the midfielder ran on to a throw-in, and struck a first-time shot that cannoned back off the cross-bar. Finally it lifted United. Ronaldo headed home, but it was rightly ruled out for offside, and then dragged a low shot across goal and the crowd responded.

At least Fernandes brought some impetus – for a while – although Wolves then also struck the bar with Romain Saiss’s curling free-kick, after Matic desperately brought down substitute Adama Traore, clipping the top of the goal-frame. Soon after and Jimenez volleyed narrowly wide, from close-range, as he met a cross under pressure from Luke Shaw.

Finally Wolves made the breakthrough they so richly deserved with Traore’s cross headed out by Jones and with Moutinho collecting the ball. He had time and space despite being on the edge of the United penalty area and drilled a low shot into the corner of the net. Behind him stood Fernandes, watching. He made absolutely no attempt to get back and it kind of summed this United side up. In injury-time Jose Sa turned away Fernandes free-kick and that was it.

That is a fantastic result for Wolves. Well done to Bruno Lage and his boys for a deserved win. 19 attempts they had for their one goal, but that was all it took.

Wolves go into 8th on 28 points. United three points ahead of them in 7th.

Six defeats in the past 14 Premier League games for #mufc. This, don’t forget, is the second most expensive squad ever built— James Ducker (@TelegraphDucker) January 3, 2022