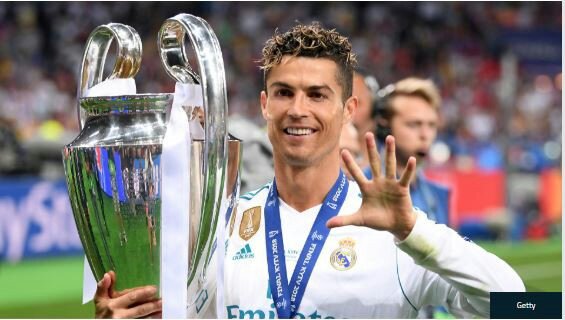 “It’s time to win, not to play.” Cristiano Ronaldo meant business when he stood up in the dressing room in Kiev and urged his Real Madrid team-mates to rise to the challenge and make history.

The Spanish giants had won the previous two Champions League titles and although many across Europe wanted a new winner to liven up the continent’s most prestigious competition, Ronaldo demanded his side put everything on the line to become the first team to win three consecutive crowns in the modern era.

“Let’s run and fight, and then our quality will show,” he continued in his motivational speech, which was caught in the recently released documentary ‘In the Heart of the Decimotercera’, in which Madrid relive another successful campaign.

“It’s worthy dying tonight to make history. We will be the first with three titles: play, win and make history.

And history was soon theirs.

It took two howlers from Liverpool goalkeeper Loris Karius and one of the best goals the tournament has ever seen to seal a 3-1 victory, but few could argue Los Blancos were not worthy of the success.

The breakthrough did not come until the second half of the game, however, and although the fault for Karim Benzema’s goal seemed to lie with Karius, Zinedine Zidane’s half-time speech may have been key to them going on to see out the win.

“I want Isco a little bit closer to the goal. Behind our three midfielders, between their lines,” he told his players. “And when we have possession, I want you on the right wing, cause on the left we already have Marcelo, Cristiano and Benzema.”

Not all was going smoothly in the Madrid dressing room, though, as the tension had been building around the team. Gareth Bale had been left upset just before the game and revealed this week that he was annoyed for not being a starter in Kiev.

Afterwards, things were very different, however. Not only had Bale scored a stunning overhead kick goal, his status at Real Madrid seemed set for an even bigger boost when talisman Ronaldo announced his imminent departure from the club.

And despite the upheaval caused by superstar Ronaldo’s desire to leave, the atmosphere and confidence in the team were taken up a notch.

Interestingly, Sergio Ramos was wearing a special ring in the style of an NBA championship one that he had specially made before the game, telling FIFA president Gianni Infantino to consider handing out their own to the victors.

“I ordered the ring before the final. It was a risk, but I never touched it until now. I’m going to register a patent,” the iconic centre-back said.

Ramos’ ring was not the only basketball inspiration evident in Madrid’s victory, as Luka Modric revealed the team had watched a documentary about the LA Lakers and Chicago Bulls, saying: “Now we have built our own dynasty with three Champions Leagues.”

But as difficult an achievement as it may have been, Real Madrid did not need to die to make history as Ronaldo predicted.

In the end, Isco summed it up in the dressing room when he told president Florentino Perez: “We make it so easy, presi.”

They may have lost Zidane and Ronaldo in the wake of that campaign, but Madrid will be hoping Wednesday’s game against Roma marks the beginning of a fourth successive season of glory and another exciting documentary.