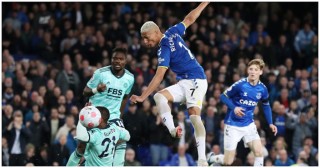 A stoppage-time goal by Richarlison was all Everton needed to earn a precious point at Goodison Park when they hosted Leicester City on Wednesday night, BBC Sport reports. Frank Lampard’s side were almost defeated in the encounter as they continue to battle to stay in the English Premier League for the next season. A loss for the Toffees would have been disastrous as a victory for Burnley against Southampton on Thursday would have seen Everton drop into the relegation zone.

They had a nightmare start to the encounter against Leicester when James Maddison’s cross was turned in by Harvey Barnes.

But Everton improved in the second half following the introduction of Dele Alli and Salomon Rondon who both played a key role to help them earn a draw.

A number of chances were wasted by Richarlison as Brendan Rodgers’ side was already cruising to victory on the night. It was the Brazilian that turned in a scuffed shot after 92 minutes to send the home supporters wild in delight for a point that was richly deserved for the team’s improvement if not for their quality.