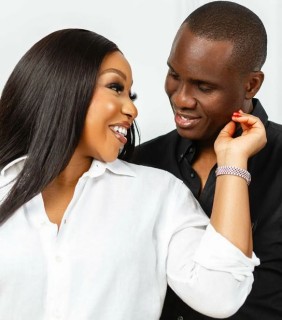 A Twitter user with the handle, @Vulcan took to the microblogging platform to call out Rita Dominic’s newly-wed husband, Fidelis Anosike, over an unpaid debt.

According to Vulcan, Mr Anosike has been owing his sister since last year and has refused to pay her till now.

His tweet reads: “Can Rita Dominic’s husband pay my sister the ₦700k that he has been owing her since last year? What manner of wickedness is this?”

Sadly, the allegation is coming less than 24 hours after Fidelis tied the knot wth actress Rita in Imo State.

@Afumuzor: “Don’t do this now, Don’t do this. It’s highly inappropriate to mention Rita. Have some sense of decency.”

@Bkacdd: “Vulcan or whatever, this is absolutely wrong!!.”

@Osinachi: “You are even the wicked person here. Some people no just like happiness naturally. kaii!! You want to trend abii? No be like this bruhhhh. Make your trend legit and make e dey valid. No dey go through corners.”