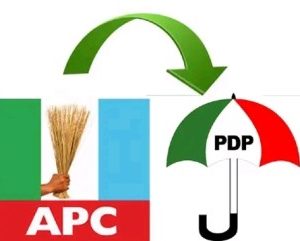 With barely one week after a frontline Aspirant in the Just concluded gubernatorial primaries under the platform of the ruling All Progressive Congress (APC), Alhaji Mohammed Idris Malagi defected to the New Nigeria People Party (NNPP) with his hundreds of supporters, another mass defection has hit the ruling party in the state with over 5,000 members have switched their loyalty to the main opposition People’s Demanded Party (PDP) in the state.

Leading the pack of defectors was a foundation member of the APC and former chairman of Tafa local government area of the state, Alhaji Ado Mohamed and over five thousand members of the party from the local government.

In a well attended ceremony at the Sabo Wuse central primary school, the headquarters of the local government at the weekend, witnessed a mammoth crowd, the defectors were received by the state chairman of the Peoples Democratic Party (PDP) Barrister Tanko Beji, accompanied by other members of the state working committee of the party.

The PDP Governorship running mate for the 2023 general election, Mr. Samuel Gomnna who is also from the local government, was on hand to receive the defectors who described his emergence as a welcome development for the area.

Addressing the crowd at the occasion, the PDP state Chairman, appreciated the former chairman Alhaji Ado who with his thousands of supporters, decided to embrace light from darkness ahead of the 2023 general elections.

According to Beji, “our party was built on a solid foundation to accommodate everyone devoid of any sentiment to pilot the country to prosperity in the next dispensation”.

Beji assured them that PDP as a responsible political party that has respect for religious differences, equity, justice and FairPlay, will continue to abide by its policies to give equal rights and treatment to all to ensure brighter future for Nigerians.

Gomna who was also a one time Chairman of the local government, said the mass defection was an indication of his achievements and love from the people during his tenure as chairman where he executed some viable projects under the platform of PDP.

He reminded the people that the only thing for Nigerians to be relieved from the unfortunate situation that the country finds itself is by voting for PDP at all levels to guarantee a better tomorrow.

Earlier the Former chairman and leader of the defectors, Alhaji Ado Mohamed said they have decided to join PDP to ensure equity and justice which accommodates people in one umbrella.

In another development, over hundreds, APC members, made up of youths, Nupe artists, Yoruba Filmmakers Association from Niger south Senatorial District of the state have defected from the ruling APC to the PDP, describing the over seven years of APC led administration as a set back for the state.

All the defectors were received by the Director General, Gagoz Support Group (GSG), Hon Yahaya Abubakar who said there was no single reward or recognition for their labour for the ruling party during the 2015 and 2019 elections.

Gagoz Support Group is one of the strong APC youth support groups make up of youths, Artists and filmmakers with members across the nine local government areas of Niger south.

According to the DG, “this is a group of patriotic Nigerians who have love and feelings for Nigerians with motto; “good thinking for a better tommorow”. decided to spread the good news about PDP and it’s candidates all over the state and the country at large, adding that “it is a registered organization with CAC number 175588”.

He said after a serious comparison of the PDP 16 years of governance and the present ruling APC eight years, the group has came to the conclusion that without any biasness that in terms of security, and over all development of the country, “APC only succeeded in puting Nigerians in a mess compared to PDP”.

“What Nigerians have witnessed in the present dispensation is nothing other than unbearable havock, pains, disunity and religious acrimony among Nigerians”, stressing that “PDP was able to manage Nigerians if not for the evil plan orchestrated by enemies within, Nigeria would have been a better place.”

Also speaking, the group of artists led by its chairman, Comrade Mohamed Labozhi said, their defection was as a result of disappointment by APC for using them during 2015 election without any benefit.