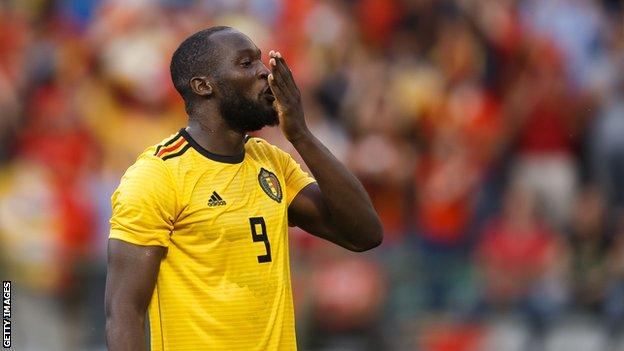 After a goalless first half, Belgium, ranked third in the world, finally broke Panama’s resistance when Dries Mertens steered in a spectacular volley.

Panama, 55th in the rankings, had a chance to snatch an equaliser but Thibaut Courtois was quick off his line to save Michael Murillo’s shot with his legs.

Manchester United striker Lukaku made certain of the victory as he scored with a diving header after an exquisite pass from Manchester City’s Kevin de Bruyne with the outside of his boot.

Lukaku then added a third with a chipped finish after a fine through ball from Chelsea’s Eden Hazard.

Belgium take on Tunisia in their second match on Saturday, 23 June (13:00 BST), before Panama are England’s second opponents a day later (13:00 BST).

Gareth Southgate’s side play their first game of the tournament later on Monday against Tunisia in Volgograd (19:00 BST).

Belgium, who included seven British-based players in their starting line-up, scored 43 goals in qualifying, a joint record for a European team, but suffered a frustrating first 45 minutes in Sochi.

Panama’s goalkeeper Jaime Penedo denied Yannick Carrasco, Mertens, Hazard and Lukaku in the opening 40 minutes as the Central Americans battled hard to try to contain one of the World Cup favourites.

The Europeans also failed to capitalise on two Panama errors when Hazard shot into the side-netting after a short Roman Torres backpass, before Mertens also missed the target when allowed to shoot from a quickly-taken short corner.

The opening matches at the World Cup have seen Brazil and Argentina both draw their first games, with holders Germany losing to Mexico.

But Belgium ensured there would be no upset at the Fisht Stadium as Mertens took advantage of Panama failing to clear their lines with a superb volley over Penedo.

They had a chance to double their lead as De Bruyne curled a free-kick wide before Lukaku dived in to score from the Manchester City midfielder’s pass and settle any nerves.

Six minutes later Lukaku grabbed his second and Belgium’s third with a composed finish over the advancing Penedo.