Ronaldo May Not Play In Manchester United’s Premier League Opener 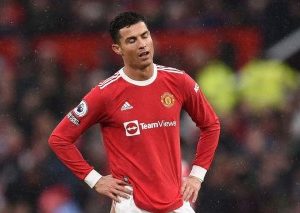 Cristiano Ronaldo may not feature in Manchester United’s opening Premier League fixture against Brighton on August 7.

The Red Devils are still in the dark over the 37-year-old’s future at the club.

Ronaldo wants to leave Old Trafford this summer and has still not returned for pre-season, having missed the tour of Asia and Australia due to “family reasons”.

His agent, Jorge Mendes, is currently trying to find him a club that plays in the Champions League.

According to the Daily Mail, United’s patience with Ronaldo is beginning to wear thin.

Erik ten Hag’s men are back in Manchester following their tour and will face Atletico Madrid and Rayo Vallecano in their final pre-season matches, before taking on Brighton.

It is unlikely that Ronaldo will be available for that game, as he is yet to train under Ten Hag or with his teammates this summer.