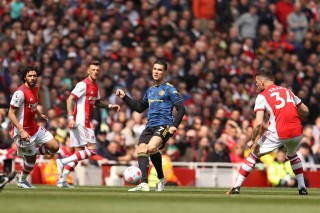 Having defeated Chelsea at Stamford Bridge, Arsenal started their Premier League game against Man United impressively and it took them only three minutes to score the first goal through Nuno Tavares.

When did Cristiano Ronaldo score for Man United?

The Portugal international restored parity for Manchester United in the 34th minute after Bukayo Saka had doubled Arsenal’s lead via a penalty two minutes earlier.

The first half at the Emirates stadium however ended 2-1 in favour of Arsenal with Man United fans thinking their players would soar in the second half. Granit Xhaka scored the third goal for Arsenal in the 70th minute as the Gunners recorded a 3-1 win over the Red Devils.