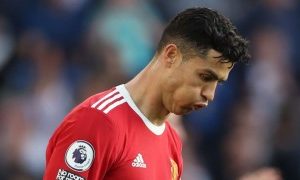 Cristiano Ronaldo is prepared to take a pay cut in order to force a move away from Manchester United.

According to the UK Independent, Ronaldo will accept a reduction in his £500,000 per week salary to join a new club.

His preferred destinations are understood to be Chelsea and Bayern Munich.

The 37-year-old is so desperate to play in the Champions League next season and is ready to make sacrifices to ensure that.

Chelsea are in need of a focal point in attack after Romelu Lukaku returned to Inter Milan on a one-year loan deal.

Robert Lewandowski is also trying to force an exit from Bayern Munich to Barcelona.